It’s been a while and I apologize for that.

Over the past few months, I’ve nearly abandoned my game project. However, the process didn’t follow the blog exactly. First I did some major changes to the architecture and advanced the process of making Pucaj miles ahead of what it was. Then I abandoned it for over two months, only to return to it a few days ago. Because of that, it took some time to reintroduce myself with code, but it also exposed some holes in code readability and maintainability that I will now be able to fix. This is almost a completely different project now, so I’ll try to make a short list of what’s new.

So let’s go through this one at a time

Shift to an entity-component system

An entity-component system (ECS) is something completely new for me, but I’ve been reading about it a lot and the more I look at it, the more it makes sense, so I made the shift.

I won’t explain in detail what it is, but in short, instead of a hierarchical relation between game objects, we now have a world object which holds a list of entities.

The important thing here is that entities should not contain logic, only data. For logic, in an ECS, you use systems. Systems are basically entity processors. They maintain a subset of entities currently existing in the game world, that have certain components. A movement system would have access to all the entities in the world that have the position and velocity components. On each tick, it would go through all of these specific entities and use the velocity data to update the position data.

Again, there is an entire science behind this, so instead of going into details, I’ll just give you some links…

This is an entire series explaining the idea behind an ECS. If you’re interested in this approach (and I really think you should be), go and read it. It will give you the basics and explain the logic and motivation behind some aspects of the ECS approach.

This is another good article that explains the idea behind it all. It’s a shorter read, but it’s a bit quicker to go into the practical approach.

Another good read. Be sure to visit the articles and sites he’s linking to also, just like with all the other links.

A good idea is to also visit gamedev.stackexchange, since there are plenty of specific questions about ECS there.

In the case of Pucaj

In the case of Pucaj, I’m still working out the details, but here’s where we’re at for now:

So those are the components I have right now. As I said, entities only hold the data, so most of them contain some fields or properties and a constructor. A select few, such as Player are completely empty and only exist to serve as an indicator. Their attachment to an entity itself is the data – a flag indicator.

Systems are there to handle the logic. Each system handles a subset of entities that hold specific components and processes them on each tick (or in some other way, depending on the type of system.

I also  have a few classes that currently aren’t actual Systems, but will probably become systems in the future. I’m just having trouble figuring out how to best do it.

Let’s be honest here. I suck at graphics. Using the old set I’ve been spending hours to make is useless for me, since they are bound to be different eventually. Because of that, I’m keeping it simple. I kept the tank graphic I was using and switched to single color tiles for the map. Once the logic behind it all is in place, I’ll start worrying about making actual, proper graphics. Who knows if this will ever be an actual game – it’s better to worry about those things later.

Pictured: The current set of map tiles I’m working with.

The tiles I have now are easy to maintain and simple to work with.

This was expected, since it wasn’t supposed to be an action game. I was just playing in a sandbox previously. Instead..

You can now zoom the camera in and out and move it around as you please. Even better, it works with a mouse as well as touch gestures. You can scroll and/or pinch to zoom in and out and you can drag to pan. A double click/tap smoothly moves the camera to the active unit.

I found some guides and I made a map generation. I’m not completely certain maps will be generated in this game, but it was a fun side-project to do and figure out, so I did it. Look into Diamond-Square if you’re interested in it. Basically, it generates sort of realistic looking topography maps and is well-suited for square based grids, but it could also be adapted to hex grids, for instance.

The current parameters make a relatively small map, so the above video won’t make it look especially great, but you can go way bigger if you want to.

Here are a couple of screens of a slightly bigger one: 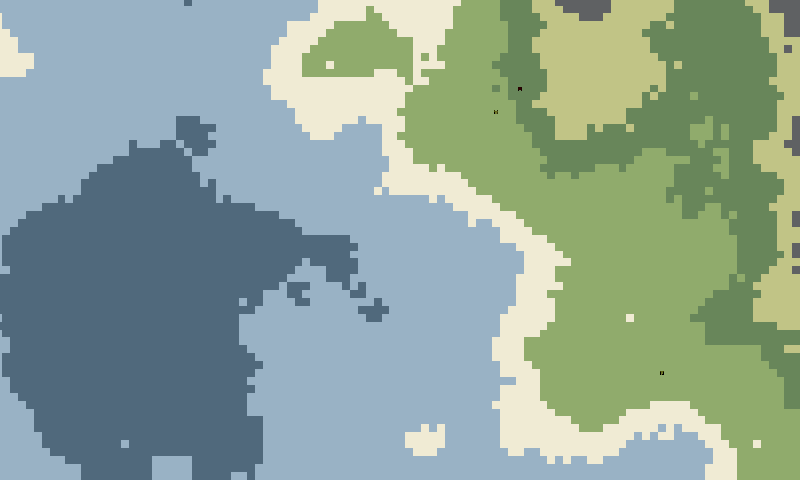 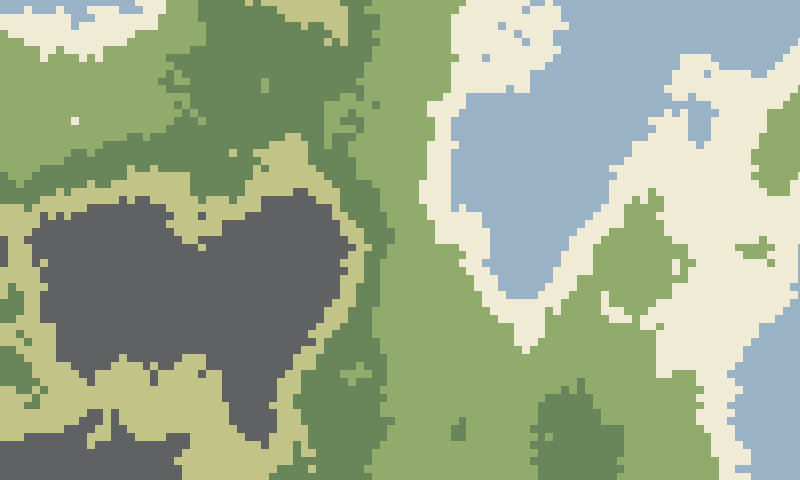 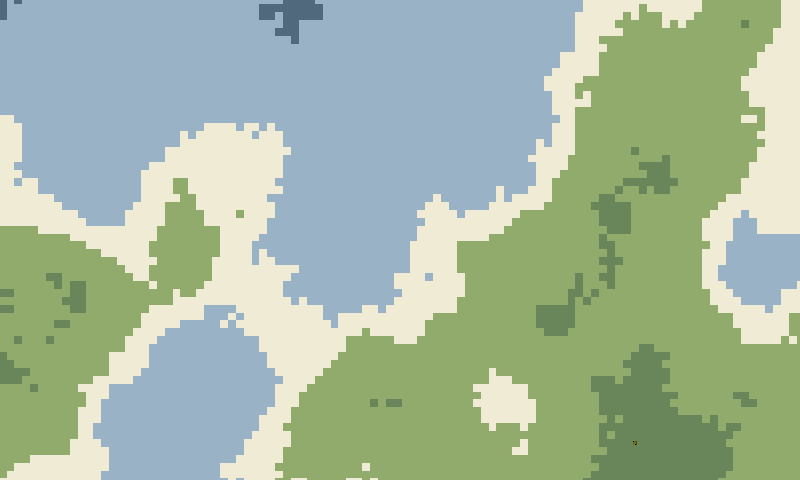 See those tiny little dots on the pictures? Those are the tanks from the video above. Also, all three of these screenshots are different places of the very same map. Fun stuff, right?

Scene2D, which is part of libGDX, has a built in menu system I’m currently using. It’s not pretty, but it’s functional. I haven’t decided yet if I’ll keep using it, modify it, or go with something more visually oriented.

This should be self-explanatory. I don’t have many assets right now, but I’m expecting the amount to grow, so there will be a need for some sort of preloading mechanic. Since it will hopefully be a relatively tiny game, I feel it’s best to just preload everything into memory at start-up.

Because of that, I designed an asset loading singleton. At game start-up, this manager loads everything into memory and holds it there. Instead of loading each individual asset as I need it somewhere in the game, I now simply ask the manager to give me the desired asset. I use a loading screen to notify the user of this process.

Now, as I said, the amount of assets is very low right now, so the loading screen goes away quickly. I actually had to add an explicit delay in order to show it during testing.

I also implemented a very dumb AI player to control the two enemy teams. Right now, as you start the game, three teams are generated – the player team and the red and blue AI teams. It’s a free-for-all so everyone is fighting everyone. You can see this in one of the previous videos, the one demonstrating the menu system.

As I said, the AI is extremely dumb, but it does heal and execute attacks, so it’s fun for messing around with. I’ll make it smarter and try to give it more personality at a much later stage.

And that’s it! This is the scope of the changes that happened to my “game” over the last few months. I’m back into it now, so hopefully, you’ll get more frequent updates for a while.